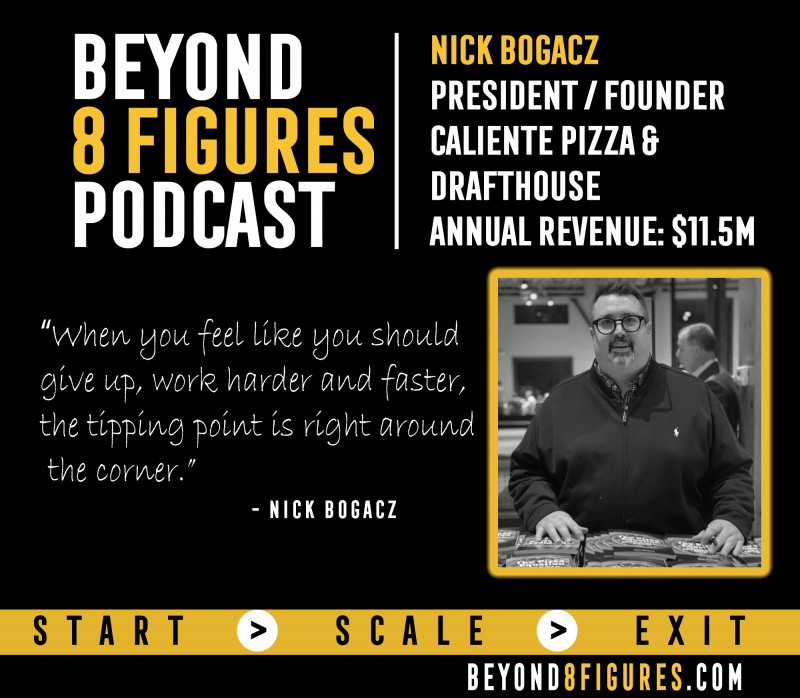 With over 20 years of experience in the industry, Nick opened his first location in the fall of 2012 and has grown quickly to his 5 current locations, with the 6th one coming in this first quarter of 2020.

He started in the industry as a delivery driver in 1996 and fell in love with the team atmosphere and high energy that the pizza business provides. He worked his way through many levels of corporate chain pizza companies, always having his eye set on opening his own independent stores.

You've got to care about your people before they'll care about you. @nick_bogacz
Tweet This
Nick has grown his company to over 200 employees through leading by example, having won numerous awards in the industry, including World Championships at the Pizza Expo in 2016, 2017 & 2018. They won the Best American Pizza 2019 at the World Pizza Championships in Parma Italy. He’s also a part of the International Pizza Expo’s family of speakers as well as being a member of the esteemed World Pizza Champions Team.

Nick was successful in bringing together pizza and craft beer within his company. Each of his restaurants boast over 24 taps and a bottle selection of over 150 beers. His stores specialize in hard to source craft beers from across the country and around the world. He has also taken a unique approach to craft beer by setting up collaboration brew’s with breweries. Nick and his team go to breweries where they brew special recipe beers to be served at his locations. He has collaborated with local breweries and world class breweries across the country.

Nick’s goals in the Pizza Industry continue to be met by being committed to excellence with focus and positive vibes. His wife Angie has been his biggest supporter and is proud to be a Pizza Wife for Life. His teenage kids have grown up in the industry and have taken a keen interest in the business. When not in the grind and every day hustle that he craves, he enjoys good quality fun and relaxing with his family.

In this episode, Steve, Mary, Richard, and Nick discuss:

From my dad: ” Whatever you do, do it for yourself.”

When you feel like you should give up, work harder and faster, the tipping point is right around the corner.