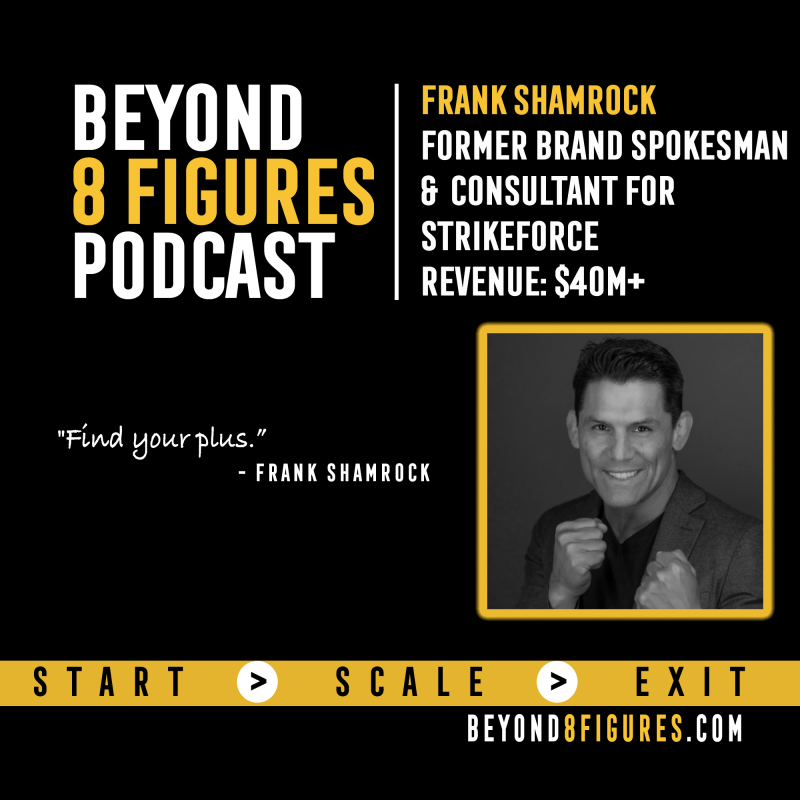 Best Advice I Ever Received: Help others, help you.

Best Advice I’d Give To Someone Who Wants To Build A $10m+ Business: Find your plus.

In this episode, Steve, Mary, Richard, and Frank discuss:

“Start with the facts, with what you want to achieve. I knew what I wanted to achieve – I wanted to become a world champion, I wanted to lead people, I wanted to help people. That was it. The process to getting there became fighting, teaching, broadcasting, league ownership, entrepreneurship.” — Frank Shamrock

Frank Shamrock is best known as the guy who convinced America it was a good idea to turn illegal cagefighting into a televised sport.

Frank is many things: visionary entrepreneur, ex-con, star athlete, survivor of childhood abuse, international speaker, husband, dad and general defier of the odds.  He holds multiple world records that stand to this day and remains the only athlete in history crowned champion of every major MMA sports league.

Born to a single mother on welfare, Frank endured a childhood of abuse and isolation until being taken by the state at age 12. By 17, he was in prison, and by 22, he was crowned one of the youngest champions in sports history.

Over the next two decades, sportscasters and storytellers delighted in the antics of this charismatic, seemingly unbeatable champion of an illegal sport that was changing the face of television. Frank Shamrock “The Legend” was born. Frank become the sport’s first middleweight champion, free agent, on-air broadcaster until finally, he owned his own league.

In 2010, The Legend hung up his gloves to focus on raising his daughter as a full-time stay at home dad. He sold his MMA league two years later, freeing up time to produce TV, films and books. Author of MMA for Dummies, Frank literally wrote “the book” on the sport.

In 2015, Frank responded to an ever-growing demand to share his unusual methods of achieving personal and professional success. His stories on overcoming adversity, gaining clarity, staying the master of one’s own story and beating the odds move audiences to both laughter and tears (often at the same time).

Despite being a trained killer, as a speaker, Frank is best known for his humour and gentleness. He brings his trademark unwavering focus to creating trusting conversations and long-lasting results while providing proven tools to achieve the seemingly impossible. Shamrock’s coaching and training techniques are employed by top performers, celebrities and major corporations around the world.

Today, Shamrock lives in Los Angeles with Amy, his wife of many years and two kids, Frankie and Nicolette. Together they oversee Shamrock Way, a family nonprofit that tackles social issues and supports at risk communities with educational scholarships.